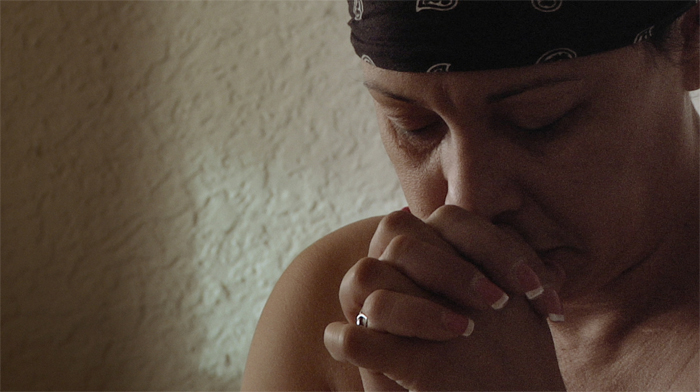 What would you do if the worst thing that ever happened to you felt like it kept happening? Over six years, BURIED ABOVE GROUND explores this question and the road to recovery through the eyes of three post-traumatic stress disorder (PTSD) survivors.

In BURIED ABOVE GROUND, we meet three Americans who are fighting ngoing battles with PTSD -- Luis, a combat veteran; Erundina, a lifelong survivor of domestic violence who fights addiction issues; and Ashley, a New Orleanian who lived through Hurricane Katrina and returns to confront the aftermath. One powerful narrative plays, whereby the personal becomes polemic.

Luis’s journey establishes a master narrative that capitalizes on the public’s emerging understanding of the relationship between combat trauma and PTSD. Through Luis’s arc, we learn about the hellish symptoms of PTSD -- acute anxiety, flashbacks, severe depression, dissociation, hypervigilance, emotional numbness, and isolation. From there, we see the ways that PTSD devastate the lives of other trauma survivors who are far less visible in the culture: survivors of sexual assault, domestic violence, child abuse, and natural disasters.

BURIED ABOVE GROUND embeds in its three subjects' lives over a six year journey using subjective framing, vérité, interviews, and personal video archives. We gain access to their therapy sessions, home life, and efforts to embrace community all the while trying to unburden themselves from the crippling lock of their past traumas. Luis learns to cope through the bond he forms with his service dog Tuesday and by becoming an advocate. In the wake of evacuating Hurricane Katrina, Ashley returns to New Orleans to rebuild herself, her home, and her city. After a lifetime of abuse, Erundina wages an ongoing fight for her sobriety, while putting herself through college and repairing the relationship with her son.

Where does the title “BURIED ABOVE GROUND” come from?

The title of the documentary comes from a line in English writer William Cowper’s (26 November 1731 – 25 April 1800) poem entitled “Hatred and vengeance, my eternal portion.” This poem was written in the aftermath of his third suicide attempt. In my mind, the despair he represents in this poem, resonates as the darkest days of someone experiencing the debilitating symptoms of post-traumatic stress disorder (PTSD).

Hatred and vengeance, my eternal portion

Hatred and vengeance, my eternal portion,
Scarce can endure delay of execution,
Wait, with impatient readiness, to seize my
Soul in a moment.

Damned below Judas:more abhorred than he was,
Who for a few pence sold his holy Master.
Twice betrayed Jesus me, this last delinquent,
Deems the profanest.

Man disavows, and Deity disowns me:
Hell might afford my miseries a shelter;
Therefore hell keeps her ever hungry mouths all
Bolted against me.

Him the vindictive rod of angry justice
Sent quick and howling to the center headlong;
I, fed with judgment, in a fleshly tomb, am
Buried above ground.